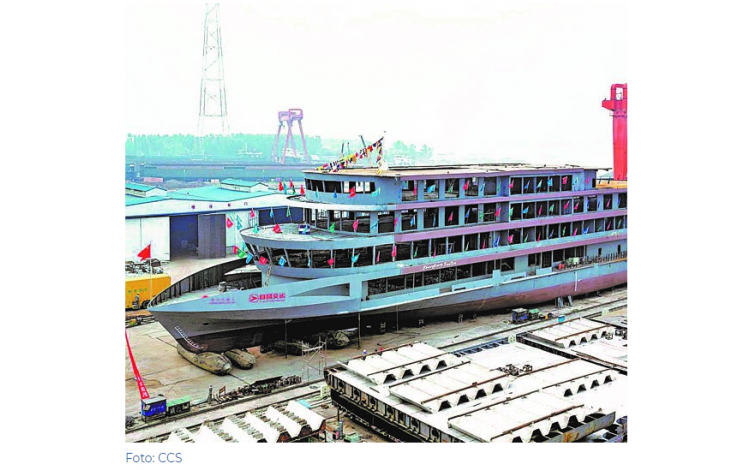 The 100-metre-long newbuild was delivered at the Yichang Xin Hui Shipbuilding on the Yangtze River in the Hubei province.

The ship has a capacity of 1,300 passengers and will sail in the reservoir areas of the Gezhouba Dam and Three Gorges Dam in the Yangtze River.

CCS’ Yichang office oversaw the plan approval and building survey while its Wuhan Rules & Research Institute provided technical support for the green technology and intelligence elements of the vessel.

Luo Xiaofeng, Director of Wuhan Rules & Research Institute, said the cruise ship can slash an estimated 530 tonnes of diesel fuel and 1,660 tonnes of GHG and hazardous gas emissions each year with 7.5 MWh marine power lithium battery system that is equivalent to the power of 100 electric cars, which compared to a similar diesel-powered vessel.

The ship will be charged by hydroelectric energy with a range of no less than 100 kilometres. It is also one of the first all-electric ships to adopt a system of high-voltage charging and low-voltage power supplement.

The vessel is expected play a key role in promoting the green development of the Yangtze River shipping industry, which has received increasing attention in recent years. In 2020, four ministries, including ministry of transport and ministry of Eclology and Environment, issued a joint plan to curb ship and port pollution, urging comprehensive improvements in pollution prevention and acceleration of the green development of the shipping industry along the Yangtze River Economic Belt.

“The project demonstrates the implementation of advance Lithium Battery Power Ship Rules and the building of electric inland waterway vessels in China. We expect that the innovations made on this vessel about the size and power of the battery can promote the development of environmentally friendly electric vessels,” Xu Junjie, GM to CCS Yichang, commented.

Luo said the vessel obtained the notations of “Green Ship” as well as met high standards of vibration and noise reduction.

He added that the successful delivery of the ship is a breakthrough in environmental protection and ship intelligent control and marks the successful application of the CCS Rules for Inland Green Ships, which will lead to the development of electric vessels in China.

PORT OF HELSINKI WILL BE CARB NEUTRAL BY 2030

The Port of Helsinki is doing its part in the world´s common efforts to combat climate change. In this work, the main tool is the carbon neutrality program adopted in 2019. The Board of Directors approved a more adjusted schedule for the program, in which five own and ship emissions targets were advanced for 2030.