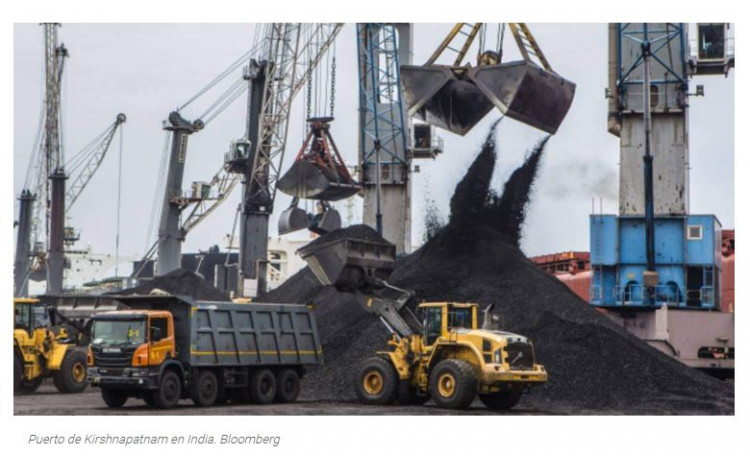 European countries faced with Russian gas supply cuts are buying coal in the most remote markets, such as Tanzania or Botswana. In another time, it would have been impossible for African coal to reach the Old Continent due to the high cost, but now they go to any part of the world and at any price, given the risk of a shortage of gas to generate electricity and despite the fact that it is the source of more polluting energy.
The quiet Tanzanian port of Mtwara was mainly trading cashew nuts until the end of last year. Ships now carry tons and tons of coal. Tanzania traditionally exports charcoal only to neighboring countries in East Africa; shipping it further was insane, requiring the ore to be trucked more than 600 km from the mines in the south-west to Mtwara, the closest port to the Indian Ocean.
Prices of thermal coal, used to generate electricity, have jumped to record highs as a result of Russia´s invasion of Ukraine. Moscow has responded to economic sanctions with gas and coal supply cuts. The situation is critical. Russia is Europe´s main energy supplier, which has led many European countries to pay the highest price for coal from often remote mines in places like Tanzania, Botswana and possibly even Madagascar.
"Europeans, after the Russian war, will go anywhere there is coal," says Rizwan Ahmed, managing director of coal miner Bluesky Minings in Dar es Salaam, Tanzania. "They are paying very good prices," he told Reuters.
Freighter Cargill has seen a sharp rise in coal shipments to Europe in recent months, says Jan Dieleman, president of the shipping division. The company has shipped 9 million tonnes of coal globally in the June-August period, compared to 7 million last year. The manager points out that despite the high price, it is still cheaper to import coal from Africa than to buy gas. "We will see very strong flows from Colombia, South Africa and even further afield." Yet the window of opportunity may be short if some countries with coal resources see the margins to be gained as an opportunity too good to miss.
The price of coal in Australia, the most followed by the market, is trading close to 450 dollars a tonne, close to the historical maximum of March, when it exceeded 480 dollars. A year ago, coal cost $176. The Tanzanian port of Mtwara has already set sail for Europe with 13 ships full of the black mineral. And cargo orders will already reach 57 requests, according to Shipfix.

Global seaborne thermal coal imports reached 97.8m tonnes in July, the highest level on record and an increase of more than 9% from last year, according to Braemar. Volume fell to 89m tonnes in August, largely due to disruptions in exports from top producer Australia.

Tanzania expects coal exports to double this year to around 696,773 tonnes, the country´s Mining Commission has told Reuters, while output is expected to rise by 50% to 1,364,707 tonnes. The coal boom has allowed the government to consider building a railway connecting the coal-producing region of Ruvuma with Mtwara.

Ruvuma Coal has already exported at least 400,000 tonnes of coal to the Netherlands, France and India since November, according to trade data reviewed by the agency. Coal miners are enjoying record margins, in what some see as a last gasp for an industry facing intense pressure to cut output over environmental concerns.

The margin of the miners amounts to 235 dollars per ton

With coal at $75 a tonne at the end of 2020, a coal mine could make a $15 a tonne margin, according to Rob West, an analyst at consultancy Thunder Said Energy. But when prices reached $400 a tonne, the cash margin increased to $235 a tonne. In fact, carriers in Europe are willing to pay double the price quoted by Asian buyers, according to some Bluesky executives.
In landlocked Botswana, selling coal on the seaborne market used to be a pipe dream, as most exports went to neighboring South Africa, Namibia and Zimbabwe. “Before, logistics would kill us. However, at current prices, we can make this work,” says Morné du Plessis, CEO of Botswana-based coal miner Minergy.

Madagascar, the world´s leading exporter of vanilla, could become another exporter on the global coal scene. "Current prices may allow coal miners in Madagascar to start exporting coal for the first time in the country´s history," says Prince Nyati, director of one of the companies developing a coal project in the country. However, new entrants will have to prepare to pull out or even stop production if market conditions turn unfavorable, Nyati says.

The invasion has forced EU nations to take steps to reduce dependence on Russian gas. The bloc´s ban on Russian coal imports has further increased pressure on electricity generators to find alternative sources to gas.

Russia provided 70% of the coal exported to the EU

Russia typically supplies about 70% of the EU´s thermal coal, according to Brussels-based think tank Bruegel, while it normally supplies 40% of the bloc´s natural gas.

European countries have temporarily shelved environmental goals as they seek to store the fuel and reopen the dormant coal plants to prepare for what could be a difficult winter.

"Strong incentives have pushed coal and lignite generation 25% above levels a year ago, despite a large number of plant closures in the last three years," Bank of America analysts note on Europe. .

The current increase in burning coal to generate electricity could put countries in conflict with ambitious goals to reduce CO2 emissions. In the EU, burning more coal will increase CO2 emissions by 1.3% a year if Russian gas supplies stop altogether, according to energy think tank Ember.

Governments in Europe say that data is temporary, while the war lasts. Germany is delaying planned closures of some coal plants to ensure security of power supply. Meanwhile, Botswana coal miner Minergy sees the coal market remaining strong until at least mid-2023, if not longer. It hopes to double its production capacity.