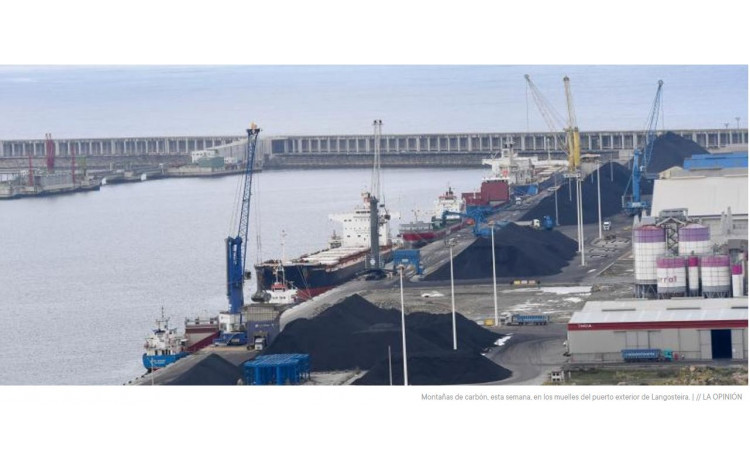 This week there have been two striking events in the outer port of Langosteira: seven ships have coincided at the same time and four large accumulations of coal can be seen along all the docks. In the latter case, unlike what was usual, this merchandise is not destined for companies in the area, such as the Cerceda thermal power plant when it was in operation, but rather remains stored in the dock waiting for a new ship reships it and transports it to its buyer; that is to say, it functions as a logistics node for the redistribution of products for their channeling to other ports, mainly in northern Europe. This situation started after the outbreak of the war in Ukraine, which caused changes in the maritime routes and an energy crisis.

In the next few days, two ships are expected to dock at the Langosteira site to unload coal. One is the Onego Otra, which comes from Lake Charles, in Louisiana (United States) and carries 6,000 tons. The next to arrive will be the Anna J, which departed from Maputo, Mozambique, with 77,000 tons. Two other ships remained docked yesterday. One was the Vertom Meridiaam, which loaded 7,700 tons to take them to the port of Carboneras, in Almería, and the other, the Ebrobarg, which will transport 8,150 tons to Mosjoen, in Norway. In these last two, its consignee is Pérez Torres Marítima.

The Port Authority of A Coruña points out that as a result of the Russian invasion in Ukraine, traditional traffic flows were altered, natural gas became more expensive and that, given this situation, the outer port has managed to become a "logistics center" that redistributes coal, in addition to other goods such as fertilizers and phosphate rock, although to a lesser extent. In the case of the mineral, the port organization details that the main final destinations are countries in northern Europe, such as Germany and Poland, where coal has an important weight for the generation of electricity. This is added to the increase in the price of natural gas due to the conflict in Eastern Europe, which causes the use of coal.

What are the reasons for choosing the port facilities located in Arteixo? The Port affirms that its “draft” has a great influence and that there is a lot of “space” available to store products, a characteristic that is not common in other more consolidated ports.

The Port Authority provides data that helps to understand the importance that these redistributed products have achieved compared to other more consolidated ones. Solid bulk, such as coal, fertilizers and cereals, have surpassed liquid bulk for the first time (this includes oil destined for the Repsol refinery). This situation has never occurred before. This trend started in August and was repeated in September. The forecast of the Port is that it be maintained over time.

In recent weeks, other boats have arrived to collect coal. The Comity took 35,000 tons to Estonia, the Manisa Star shipped 7,700 tons to France.

Coal operations, which had been paralyzed as a result of the closure of the Meirama thermal power plant, have returned to the port thanks to these operations. In addition, the port organization indicates that the outer port continues to grow in grain traffic, thanks to its consolidation as a logistics center for bulk agri-food, and maintains its leadership position in the north of the peninsula.