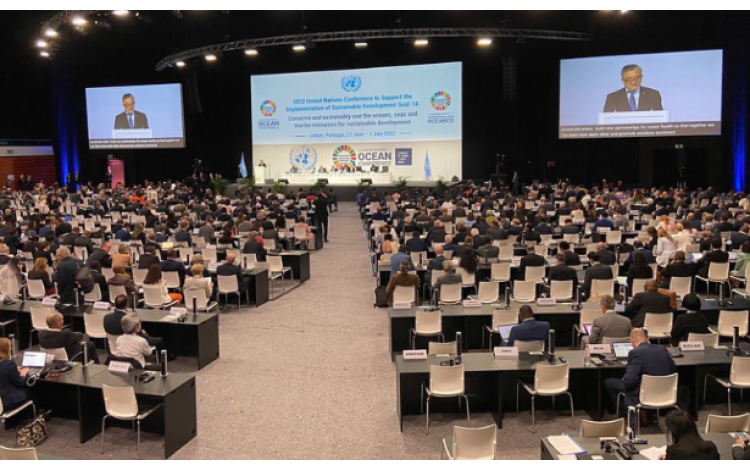 Safeguard the oceans for the future

IMO Secretary-General Kitack Lim highlighted the truly international character of shipping. “The ocean really does sustain us all, and the maritime sector connects us all. A greener and more resilient maritime sector is essential to the needs of future generations: the maritime sector underpins all sustainable development," he said.

Speaking to him at the Interactive Dialogue on Tackling Pollution in the Marine Environment, Mr. Lim said: “The regulatory framework must be fair and ensure that no one is left behind as the industry moves towards even greener operations. Pollution in the sea is a transboundary problem. The threats of certain types of pollution, such as marine pollution due to plastics, are observed on a global scale and the effects of this pollution, together with climate change, create a growing threat to marine biodiversity, ecosystems and, consequently, human welfare."

"As we scale up our efforts, collaboration on R&D, information sharing and capacity building will be critical to ensuring that no one is left behind in driving the greening of the shipping industry," said Mr. Lim.

At the Oceans Conference, Heads of State, Government and high-level representatives unanimously adopted the Lisbon Declaration, "Our Ocean, Our Future, Our Responsibility", a set of innovative, science-based actions, that take into account the capacity challenges faced by developing countries, in particular small island developing States and least developed countries, which are at the forefront of the devastating effects of the ocean emergency.

Reducing marine debris in the oceans is a key target of Sustainable Development Goal (SDG) 14. The IMO and Food and Agriculture Organization of the United Nations (FAO) GloLitter Partnerships project, launched Launched in 2019 with seed funding from the Norwegian Government, it aims to help shipping and fisheries look to a low-plastic future. GloLitter is assisting developing countries to recognize every opportunity to avoid and reduce marine litter, including plastic litter, from the shipping and fishing sectors, and to reduce the use of plastics in these industries. , as well as opportunities to reuse and recycle plastic.

At a side event on maritime transport and fisheries cooperation to tackle marine sources of marine litter, GloLitter Lead Partner Country Costa Rica shared examples of how the country is tackling the significant issue of plastic litter, including a ban on single-use plastics such as plastic supermarket bags. With the support of the GloLitter partnerships project, the country will launch a series of priority actions to tackle marine plastic, focusing on legal and policy reform and the implementation of the IMO MARPOL Annex V instrument on the regulation Garbage from Ships, the London Convention and Protocol on Dumping of Waste at Sea and the FAO Voluntary Guidelines on the Marking of Fishing Gear. Costa Rica plans to establish port reception facilities to be able to collect marine plastic litter, including fishing gear, with the aim of reusing it in the circular economy.

At the same side event, FAO also shared its experiences on tackling marine plastic litter in the fisheries sector, and a representative from the GloLitter Global Industry Alliance highlighted the importance of linking regulatory and industry actions.

The Lisbon Declaration commits to prevent, reduce and eliminate marine plastic litter, including single-use plastics and microplastics, among other things by contributing to comprehensive life cycle approaches, promoting resource efficiency and recycling. , as well as environmentally sound management of waste. The Declaration also recognizes the creation, at the resumed fifth session of the United Nations Environment Assembly (UNEA 5.2), of an intergovernmental negotiating committee for the elaboration of an international legally binding instrument on pollution by plastics.

The Lisbon Declaration commits to reducing greenhouse gas emissions from international shipping, especially maritime transport, as soon as possible, recognizing the leading role of the IMO.

IMO participated in several events highlighting IMO´s efforts to decarbonise shipping, including ongoing work with many countries through its global projects to showcase innovation, link decarbonisation projects and promote trials and pilot projects, which will feed into the revision of the initial IMO GHG Strategy.

"Just and equitable transition in decarbonizing the maritime sector means providing employment and skills development opportunities to seafarers, port workers and the shipping sector in developing countries," said Mr. Lim. “This transition is challenging, but it can allow the sector to reconnect with young generations from all regions of the world, many of whose future careers will be centered around energy efficiency and renewable power generation technologies. As the shipping industry makes this transition, it will create opportunities for many developing countries, which are already exploring the production of renewable fuels that can serve to accelerate their transition to low-carbon economies. All stakeholders must collaborate to maintain the momentum of shipping decarbonization and work together for a greener future,” he said.

Empowerment of women and girls

IMO participated in a side event co-sponsored by the World Ocean Institute (World Maritime University-Sasakawa); International Maritime Organization; International Seabed Authority; Government of Antigua and Barbuda; Sailors for the Sea Japan; and Women Leaders for the Ocean.

“By actively training women with the necessary skills and maintaining a barrier-free work environment, we create truly sustainable systems of gender equality,” said Mr. Lim. “Our efforts to support Sustainable Development Goal 5 on gender equality must continue to be integrated into all of IMO´s work. This is vital at a time when the maritime sector is working to transition to a more sustainable future and to decarbonize, digitize, increase efficiency and fight climate change. This transition cannot take place without the brightest minds working to find solutions."

The IMO delegation also participated in a side event on underwater noise, which showcased the Organization´s work in implementing guidelines to reduce underwater noise from commercial shipping and its adverse effects on marine wildlife. , as well as the connection with particularly sensitive marine areas (PSSA).

An important step towards a capacity-building project to deal with shipping noise was taken the week before the United Nations Ocean Conference, as the Global Environment Facility approved the project identification form to prepare the full proposal for a medium-sized project financed by the same fund. This means that IMO will start the preparatory phase of a global capacity-building intervention on underwater noise from ships.

IMO contributed to and co-organized several events that highlighted the crucial nature of inter-agency cooperation, through UN-Oceans as well as the Joint Group of Experts on the Science of Marine Environmental Protection (GESAMP) together with other entities of the United Nations system.

United Nations Conference on the Oceans

The United Nations Conference on the Oceans had more than 6,000 participants, including 24 Heads of State and Government, and more than 2,000 representatives of civil society.

IMO contributed to the overall planning and preparation of the Conference on the Oceans, as co-organizer of the Informal Preparatory Working Group 1 on marine pollution, together with UNEP, thus leading the preparation of the background document for the Dialogue.

United Nations Conference on the Oceans

The United Nations Conference on the Oceans had more than 6,000 participants, including 24 Heads of State and Government, and more than 2,000 representatives of civil society.

IMO contributed to the overall planning and preparation of the Oceans Conference, as co-convener of Informal Preparatory Working Group 1 on Marine Pollution, together with UNEP, thus leading the preparation of the background paper for the Interactive Dialogue on pollution of the sea during the Conference.

News from: MARITIME AND PORT News